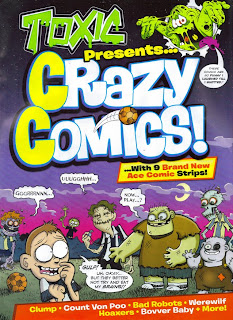 This April 1st, Fools' Day, see's kids humour mag, TOXIC#137 giving away a free 16-page comic supplement, with 8 brand spanking new strips/characters, and one from the 1970's dusty IPC vaults, cleaned up and reworked.
The idea is for readers to vote online for their favourite, and the winner returns , potentially, as an ongoing feature in the regular TOXIC. The revamp strip, is Werewilf, a character that made his debut in Whoopee!, March, 1976, and disappeared not long after.
Me and my old mate, sometimes comic strip-scribe, ex-viking-gone-to-seed and bass-thumping rock god, Paul Birch, decided the great pun-ish name should not go to waste. So we gave Wilf a modern polish, but soaked him in an unashamed rose-tinted bubble bath of nostalgia. Something that captures the feel and look of comics we grew up with, and a Britain that's terraced houses, allotments, garden sheds, bangers and mash, fat women-in-curlers and grandads in nice suits.
Along with co-scripting, I'd planned to draw the two pager, but my commitment to Channel Evil meant we had to find a replacement, and we chose the more-than-capable John Erasmus, an artist that had mostly left comics to pursue film making and storyboarding, but Werewilf shows he's definitely not lost his touch - all panels HAND-COLOURED with marker pens - take note photoshop fiends!
There's some other smart stuff in their, two by my Zombie Tales artist partner and good egg, Paul Harrison Davies. Read more about Crazy Comics full content at; http://lewstringer.blogspot.com/2009/03/crazy-comics-is-coming.html
Below is my character sketches for Wilf and a coupla panels from the strip. Obviously, I'm biased, i want you to vote for Werewilf, if just so we can see more of John's gorgeous cartooning, and more can be found at; http://johnerasmus.com/ 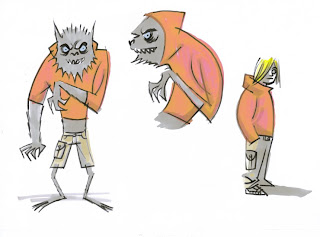 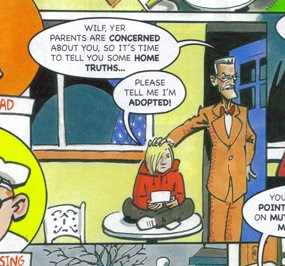 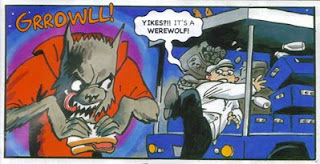 A Chris Lee pic i did for Little Shoppe of Horrors #22, which spotlights the 70's set Hammer Dracula movies. A very groovy issue, have a viddy over at; http://www.littleshoppeofhorrors.com/ 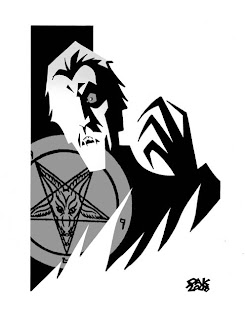 A Whistle for the Deep 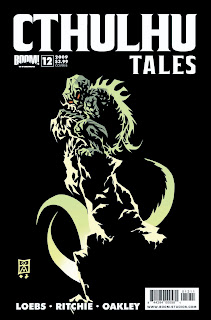 Cthulhu Tales #12 IS the final issue. Seems not enuff comic readers enjoy anthology books, and most comic shops don't/won't give em the space, cus DC and Marvel bring in the BIG numbers, and your average comic shop manager couldn't give a toss about the indy guys who don't.
But the final issue is cause for celebration, behind a variant cover my moi, there's a 10 page strip i wrote last year, drawn by the criminally ignored/unknown Dave Hitchcock. It's called A Whistle for the Deep, and in contrast to the strip i wrote for Zombie Tales #7, this is me doing it straight, serious hat on and all, and I'm pretty chuffed with it.
It's beautifully, hauntingly drawn, even the horrid bits, and hopefully, this tale of a monstrous heritage and a boys dark destiny, will leave you a little spooked. It's on the shelves, in any comic shop that offers choice and variety(good luck with that one!). Please go and buy it.
Meanwhile, marvel at Dave' s latest stuff at http://davehitchcock.blogspot.com/

Below is the first page, unlettered and uncensored.
Boom! were concerned that too much bare lady was on show since the book was not labelled 'mature readers'. And it just might end up a target of the stateside overzealous loony 'moral majority'. Mostly these are concerned parents who usually don't blink a righteous eyelid at copious comic book bloodletting and gratuitous punching and shooting. But they exclaim horror at the sight of two consenting adults making/about to make love, since this just might drive young readers to underage sex, rape, general debauchery, and a reckless abandonment of wholesome American family values.
A bible in one hand and a gun in the other, they take this shit seriously; they boycott, and threaten, and they get people arrested for selling 'obscene' material to minors. That's partly why the Comic Book Legal Defence Fund was set up, which you should support; http://www.cbldf.org/ .
So, not wanting to be awkward and provocative, we covered up the rude bits. No matter, not like it's damaged the integrity of the story. And it's a gorgeous page, either way. 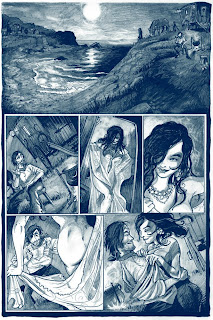 PS; the letterer buggered up on the third page, the caption 'three weeks later', should be in the second panel, NOT panel one.. Makes a BIG difference.
Posted by shane oakley at 4:07 PM 5 comments:

Jez and the lads 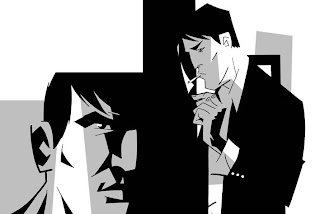 Shots from Channel Evil #1. More art, along with some words from me, at http://www.renegadeartsentertainment.com/ 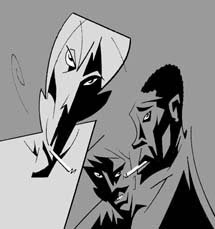 Got your order in yet?
Posted by shane oakley at 1:44 PM 5 comments: