Last pic of 2007. Inspired by an umpteenth viewing of John Carpenter's The Thing.

NO agonizing with this one...it's 'ordinary' stuff that's hard to draw. 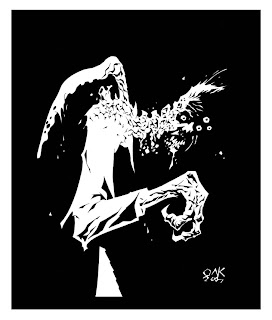 For near FOUR days we've bin unable to get online.

Belated best to you and yers. 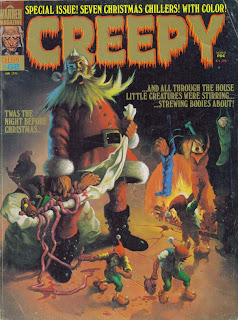 In the interest of artistic integrity, journalistic accuracy and filling space, I'd like to address and amend my last post, for the record; curse or no gypsy curse, i HAVE bin plagued with ill health and misfortune, most of the misfortune resulting from ill health, and some ill health resulting from misfortune.

I've only bin dumped once, which I'm eternally grateful for(but at the time i felt like a puddle of piss ).

My career IS always stalling or taking a nosedive, due to some 'ill health and misfortune', but mostly down to my ever-growing disillusionment with an ever-increasingly shoddy industry; dumb and dull PlayStation-generation comics, editors who change minds at the last minute, and writers who never keep their word.
And sometimes, there's just better things to do.

My first rented property had a leaky roof AND a leaky ceiling. More the fault of dope-loving cowboy builders than a gypsy curse(though they could've bin related.)

Our boiler has never conked out, good job, since I'm not even sure where it is.

In the last five years the TV has bin replaced once, cus we wanted a bigger one - the screen is a lot easier to hit with a sponge house brick

Yes, broke specs many times, and also dropped a contact lense down the bog.

Burn toast often(that's how the birds like it), good job there's no batteries in the smoke alarm, cus my ears would be bleeding.

Don't miss doctors appointments, just turn up late, or on the wrong day.

There's no such thing as 'buses'.

Yeah, forget a lot of birthdays, but never my own.

Tread in dog shit rarely(even though we have a dog and a garden full of poo-mines) - usually it's cat shit.

Never walked into a lamppost, but I've seen a lamppost walk.

Never burn my hands since years of intense pencil-squeezing have robbed them of feeling...

Editors and writers - see above.

Only crashed the computer once, but we were drunk and well over the speed limit.

And, yes, like the sun going down, and the moon a-rising, Tiscali and Blogger remain forever shite. 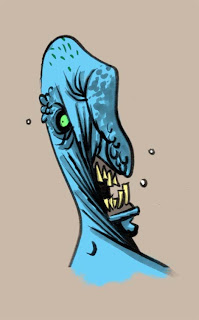 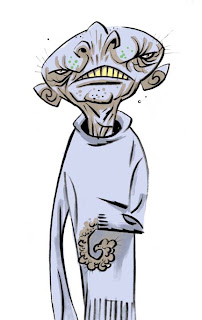 Sketching a look for two vampire characters, for a comic in progress. 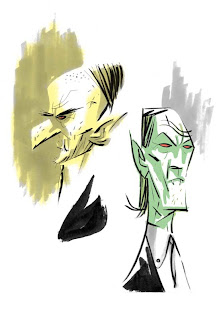 Years and years ago it happened; a frail old Gypsy woman knocked at my front door. Normally when I'm at the drawing board i ignore knocks and phone calls(or, in most cases, can't hear over the music), but that day, for some strange, uncharacteristic reason, i stopped what i was doing and answered the door.


Don't know why; it could've bin a double-glazing salesman, or a Jehovah's witness, but maybe i thort it was the Fed Ex man with a box full of complementary comics from across the seas, or an over sized gift from an adoring fan.


Whatever the reason, it's one i will forever regret.


The tiny bent woman, laden with bags and battered shopping trolley, stood looking up at me, with a toothless grin she wished me the best of the day, then tried to sell me a bath sponge.


Then she tried to sell me some tea towels, then some biro's, then cotton buds, and...and i kept nodding the no thanks nod. Each nod more forceful than the last, and slowly i started to inch the door shut. She persisted, her hand holding out a bag of eight red pegs, reaching past the door frame and into the 'personal space' of my home. I'd had enough, my patience was gone, i swore under my breath and pushed on the door, nearly trapping her hand.


Just as the door shut i saw her face glaring at me, her left eye yellow and wide, the pupil tiny and black. And that's when it happened, that's the moment. That's when i was cursed.


The gypsy cast a black spell. And i was cursed.
Since that day.

That's why I've suffered ill health and misfortune. That's why girlfriends have dumped me, why my career is always stalling and taking nosedives, why my roof leaked, why my boiler conked out, why I've replaced my TV four times in five years, why i broke my specs, why i always burn the toast and miss doctor's appointments and buses and birthdays. That's why I'm always treading in dog shit, walking into lampposts, spilling red wine on carpets, burning my hands on saucepans. And it's why editors and writers ignore my e-mails, and why the computer crashes, why sometimes i can't get on line and why sometimes i cant FUCKING post pictures on this blog!


'Technical difficulties', that's horseshit, it's the CURSE, it's not Tiscali or Blogger, it's bad magic.
No eight red pegs, no Uggly Monday, no Freaky Friday.

Careful next time there's a knock at YOUR door...
Posted by shane oakley at 4:43 AM No comments: