The strip i did with Steve Niles will be in Cthulhu Tales #2, out around the end of May. Grab your red crayon and scribble it on the calender.


It's called The Hiding Place, and I'm not really spoiling anything by showing you the opening page - it gets a LOT nastier than just a good choking. 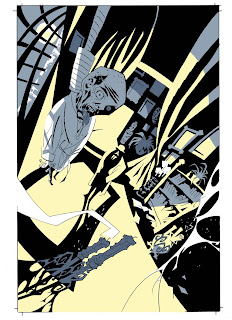 I'm a sucker for tentacles

I know. Looooooooooooooooooooooooong time, no blog. For weeks, i haven't had a spare moment to post anything, and when i did, my pals Tiscali and BT saw to it that i couldn't, but mostly I've bin mad bastard busy.

One of the projects that had me chained to the drooling board was an 8-page strip, written by Steve Niles. It's for a future issue of Cthulhu Tales, an ongoing monthly anthology inspired by the works and worlds of H.P. Lovecraft - and it's a real corker; a full-page hanging, multiple murders, mutilation, black magic, and, yes, lots of slime and tentacles.


It was a thrill to do, cept the colouring; not just cus it was the first time I've coloured a complete strip, but cus of the ridiculous, almost farcical, near endless list of technical problems i dealt with , day after maddening day.


I cannot begin to list the horrors, but let's say i nearly took a hammer to my computer AND my skull, that i bungee jumped into the abyss, that i nearly threw in the towel. Let's say that Steve cursed the script to test me; and undernourished, teeth-clenched, whisky-soaked and half mad with sleep-deprived delirium, i passed my trial by fire/got thru my initiation. And now I'm a better man.


Although it was a complete nightmare to finish and deliver(thank you for your patience, Mr.Waid - you are a gent!)I'm really chuffed with it, and gotta say it's the best short story I've ever worked on. Ticked all the boxes, pressed all my buttons. And if you have a pulse, i'm sure it'll do something similiar for you.


Can't show too much of the finished strip, but ere's a few panels... 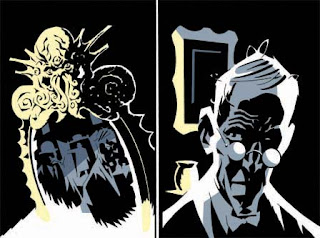 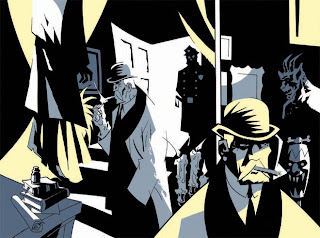 Don't know which issue it's gonna be in, soon as i do, I'll let you know.