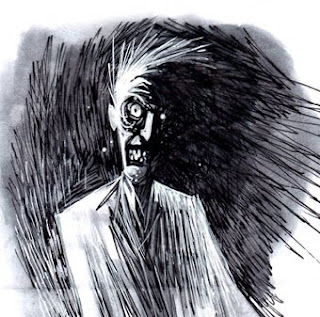 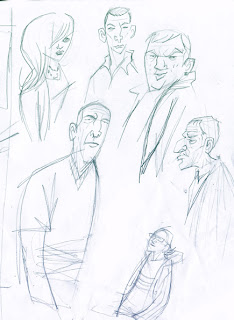 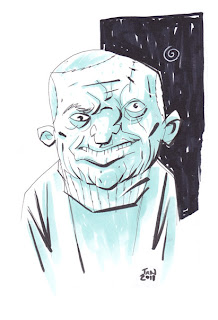 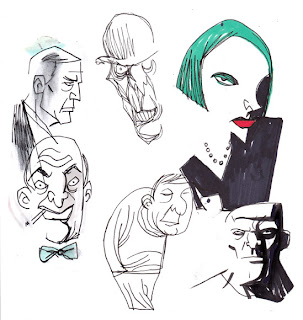 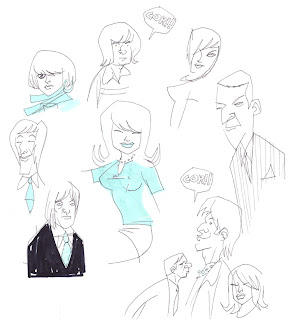 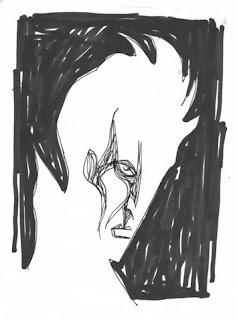 One for sorrow, two for joy

Just before Xmas day on the green in front of our house local kids built a snowman, a simple heart-warming thing to watch, especially since most kids round ere are usually face down drunk or out nicking cars.
It didn't have the classic hat, scarf and carrot nose, but nonetheless it was a grand effort, made in the freezing cold and double the size of it's sculptors.
More snow came, then the thaw, and slowly but surely he began to melt. The kids put up a brave fight trying to save him from his puddle-of-mush fate, but it was a lost cause.
2ND of January i found myself staring out the window at the lumpy remains; a sad sight enough, but it was underlined with the poignant appearance of a lone magpie, frantically circling it, cackling-rattling loudly.
That picture won't leave me.
however hard you try you can't halt the inevitable
Reading a few blogs of artist friends it seems for most that 2010 didn't come up to scratch; publishers went bunk, projects were scuppered, time ran out, people got sick and generally nobody had much fun.
Artists certainly don't have a monopoly on feeling bad/sorry for themselves, it's just that everything is magnified when you choose a creative path; negative reviews, poor sales, rejections, editors changing their minds; glitches and temporary setbacks that pile up and turn into overwhelming catastrophes.
Cus you can't help but take it personal, not when you've invested so much of yourself into the work.
The commitment and enforced isolation you need to earn a living freelancing - or simply get your work in print - isn't an easy choice; it can mean little or no social life, working ungodly hours, chasing jobs (and cheques), along with never having that 9-5 work environment where you can vent and communicate with colleagues on a daily basis, and neither can you come home and switch off with a martini and Eastenders.
You have to be contented in your own company, eternally optimistic and thick-skinned stubborn in your goals. Cus if you aren't it messes you up.
It can make you feel like yer losing your marbles.
Some of us do.
It's inevitable.
there can't be a crisis next week, my schedule is already full*
In 2010, the 'new, much improved Shane Oakley' never really turned up. I did start the year healthier and with some calming normality, but it didn't last.
I was trying to wipe out a godawful 2009 by multi-multi-tasking, finishing all the back-log jobs side by side, fast as i could. But the harder i worked the more difficult coping became. I couldn't get a decent nights sleep, hardly ate, always felt ill, and i got slower, not faster. Well, more accurately; i became obsessive and harshly critical of my work, over-analyzing/dissecting and re-doing it to death.
Things came to a head, and i lost mine.
So, i was left thinking if my comics career causes most of my woes, then surely if i eliminate the comics, I'll turn into a happy bunny who doesn't lie awake at 2 in the morning gritting his teeth.
buy new shoes, don't carpet the world
But to cut a very long story short, i realised it wasn't the fault of my career choice - but the way i went about it.
Art had became a chore, rather than a pleasure. Somewhere I'd lost the fun of it, and turned it into a set of daunting, agonising tasks.
And it really didn't help that I'd taken up gloomy introspection as my new hobby; day-to-day counting up the mistakes, regrets, missed opportunities, etc.
Fruitless, negative and time-wasting, i know. But when you're stuck, you're stuck.
if god gives you lemons
But the drawing is a solution, not the problem.
It's a refuge from/a weapon against the stupid shit that you have to deal with - it's tonic for the soul.
With pen and paper you can spin gold from nothing, and that makes you more than ordinary.
A simple truth, but one I'd lost sight off, and it's only a few close to me who helped put it back in focus.
I'm not gonna shout Hallelujah! all over the place exclaiming some overnight miraculous change. I've had a small but significant epiphany that's making my days brighter and better. I still have to build up more resilience, make wiser decisions, and above all; focus on the good stuff.
Art, life or otherwise.
ready for my close up mr demille
It's not very altruistic, but from now on I'm gonna be a greedy and brutal bastard with my time. I wasted too much last year in front of this PC, time i didn't have, time given helping others climb up the ladder(even when i needed a leg-up myself) , some that didn't think to thank me for the effort.
I've done my bit for karma points, thank you(and no, i don't want rewards or a sainthood, but good manners go a long way).
And looking back i also spent far too much time pushing and developing new projects, chasing flaky writers and absent-minded, non-committal editors about pitches/scripts and contracts - and i mean an OBSCENE amount of time writing e-mails, e-mails that have mostly led to nothing other than annoyance and dead ends.
That all stops as of today.
Time is passing by and I need all the time i can get.
I'm taking 2011 by the throat and balls, won't let go till I'm the boss. It will be a year worth celebrating, for many reasons.
And damn me if it isn't!
now, how bout some pictures?
...a carefully selected panel-sampling from The Haunter of the Dark, adapted by Dan Lockwood for The Lovecraft Anthology- Volume 1, coming from Self Made Hero in May.
Had a tough time getting it done but hell it was worth it.
here's to building snowmen! 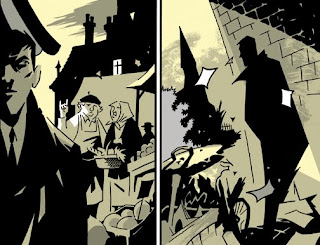 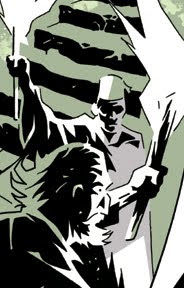 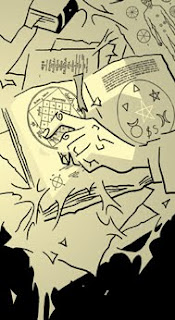 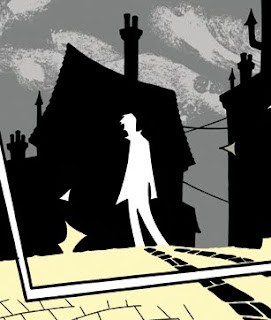