2007 pitch art from an abandoned project. Too many worries in the legal department. Damned shame. 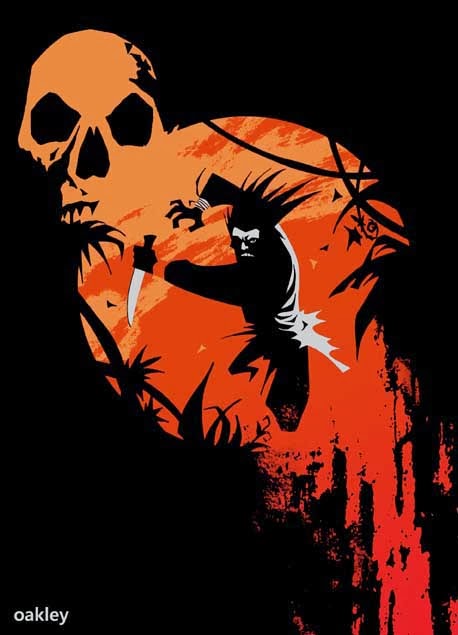 That is a damn shame, it's a lovely bit of work. You got any more irons in the fire? - bin a while since I last visited.... bloody googlereader calling it a day has meant I've bin missing out on loads!

You should come play over on Facebook. I resisted for years but so glad I signed up, especially since Blogland is filling with digital tumbleweeds.

I 'met' Mike Baron over there, and out of that came a 4-issue horror noir. Dream comic.

At the mo I'm part into a book for Dark Horse and a Foot Soldiers short. Madbat busy, but lovin it. How bout you?

Working with Mike Baron on a horror noir comic? That sounds brilliant, nice one! And a DH comic too, that's aces. Hope we get to see some sneak peeks.
Busy with doing my teaching degree mostly, but there's been the odd comic. I finished, and printed up, Astrodog and I helped put together a kid's horror comic last year called Boo. There's been the odd short strip as well, but I'm also planning a few more things soon. Still doing things like fingerpaints and whatnot - I've been posting them on Instagram here http://instagram.com/paulmhd#
Ah, I deleted my Facebook account yrs ago. I'm going off twitter too. Feels like I'm missing out on some stuff, but I do like having more time to myself!
Not sure I've got an up to date email for you, but let me know if you fancy a look at some of the stuff I've done that you've not seen.
So pleased to hear you're busy on cool stuff, I'll keep an eye out for them.