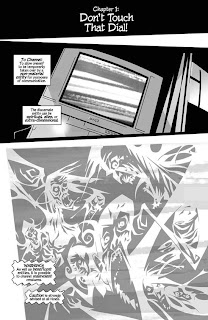 The first issue of Channel Evil is about to be released across the land. Should be in comic stores next week, well, if your comic store has ordered copies. It's not an easy sell; a new book from an Indy publisher, in black and white, without any superheroes or vigilantes, even with Alan Grant writing. But I'm optimistic that enough readers will spread the word.
Artists aren't really supposed to blow their own trumpet (last time i tried i put my back out) but i feel comfortable in saying that this is the most pleased I've EVER felt about my art. It's the closest I've got to realising the 'look' i have in my head, still not exact, but not far off.
Wasn't easy, I suffered a plague of technical gremlins, crippling doubts and an OCD mania. So bad i was close to jacking comics in for good.
It was mostly due to my obsessive quest for the 'right line' and the 'right shape'. I don't do all that photo-realistic stuff, or lots of flashy feathering and crosshatching, and my art might look simplistic to many. But i spend a LOT of time planning a page, before and during drawing. It's very measured and carefully constructed. Choosing what to leave out is equally as straining as all that detailed realism or complex penwork. It is to me, anyway.
With Channel Evil I'm trying to stew it all down even more, trying to draw comics that have an immediate effect on the senses, art that adds more depth to the story, in a style that 'bends' the form to maximum effect - with the most minimum of fuss.
I'm not gonna win any new fans with this series, cus i don't do comics how most comics are done, my 'cartoony' art alienates as many as it attracts. But I'm fine with that, doing 'house style' or pandering to fads and trends is something i gave up with acne and bondage trousers.

I'll shut up now, let you look at some pictures. 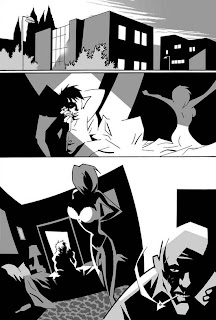 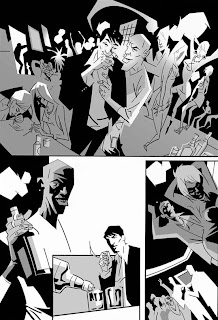 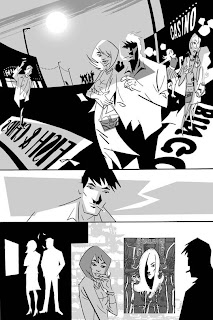 Great design and layout, some t'riffic use of grey tone.
Classic Oak style.
11 out of ten

Just awesome work. I'm sure I'm not the only one who can appreciate that doing work this abstract ( for want of a moniker) is mentally knackering.Blending background tones into forground shadows on faces takes skill - lots of skill. And it's the balance too - shape at tangent to shape - depth conjured from a few scant lines isn't for the weak.

'kin hell Shane, this is excellent stuff. The woman stretching out of bed is just a beautiful shape.
Distorting and simplifying as you have and gaining clarity aint an easy trick, well done.... and no more talk of quittin' now, y'hear!?

Looks great. Really smart design. I'll be sure to look out for it.

ade - you make me blush, sir.
i spend a LOT of time thinking and planning a page, before and during drawing it. and it can/does exhaust your creative energies.

when a page doesn't seem to work, it drives me fucking mad, REALLY mad, i've punched walls, ripped up pages - but when it does work, it's like sex and cake.

paul - thankyou. i do joke about how every so many years i 'quit', but the last time it wasn't a joke - back in 2007 - i REALLY did. got a proper job and everything. lasted about 7 months.

but remembering how defeated that made me feel, and how irritating it could be working with folk you don't like and a shit-of-a-bitch boss. well, it 'woke me up' to what a great place it can be, working from home, to your own hours, your music on, taking no shit from shit throwers, and drawing pictures for a living.

can't say i'll never have some downers agen, but as long as i can grip me pencil and pens, i'm NEVER jacking it in.

roland - cheers! in most comic shops from end of next week!

Really interesting blog post, Shane. That art work is so sharp I almost cut myself. The mix of the bleaching light and the paper cut black with those jackstraw lines.. wow!

I said before I liked the kind of retro animation quality to your characters, but your blog post highlights what I'm always banging on about, namely that those forms work because they're right. There's just as much drawing there as in something from Gray's anatomy.

I quit working in comics for years, but I'm getting drawn back in again now. One of the reasons for that is because there's some interesting comic art happening at last.

Looks superb Shane... I'll be picking this up for sure... and less of that quitting talk!

'art so sharp it could cut', i like that, readers bleeding all over my pages...

but, for me, over the 20 years or so of my career, the thing that always sapped my will power was trying to stay true and uncorrupted. meaning, i didn't want to ape a 'uniform' style just to get a job. i've tried it, at a real desperate point in the early 90's, and, paid or non-paid, i hated everything i did.
so i became jobless, depressed and a pothead instead.

but now, the market is more exciting, with a cross-pollination of arts styles mixing stuff from manga, animation, storyboarding, kids books - there's more design savvy, and just a wider view as to how a comic can look.
still tough breaking thru at times, especially right now with so many wallets empty, but i think it's a good time for artist folk who don't wanna be jim lee or do mutants.

and, i for one, am very glad you're coming back to the fold, since you 'swing your own thing' so fine - soon we will be legion!

andy - thanx. no quitting, just lots of screaming and weeping.

Damn Shane - these pages are intense!

I totally appreciate everything you're saying in your post and your comments too. Comic books suffered from a narrow view of what looks good or right - not just in art, but in the stories as well.

Thankfully, as you stated, the grip seems to be loosening and art can now be more unorthodox. I think many readers have yearned for a break from spandex, blow everything in sight to sh*t type stories as well as the 'typical' artwork that accompany it.

I'm happy to see that you've found this fulfilling, despite the difficulty. The pages look gorgeous! I'll be ordering this from the comic shop down di road come morning.

Man, I would never call what you do simplistic. It's smart and awesome.Makes me feel excited about comics the way I did when I was a kid.The mood in these is wild, sucks you right in~you can smell the scene.

Truly amazing work, Shane. I just responded to a comment you left on my blog, where you can find more praise of your work.

Keep it up! Love your style!

Beautiful pages Shane. Truly inspired design and wonderfully energy in every page.
Better than ever mate!

brian - thankyou for making that trip to the comic shop, and the compliment.
the comics industry does seem to go thru these cycles; zillions of conservative, cookie-cut comics, then tedium/stagnation. that's when editors start to panic and take the blinkers off, looking for ways to breath new life back into it's dessicated corpse.
we're due some SERIOUS re-animation!

eric - now beyond blushing, going atomic!
i'm buzzed you feel that childhood excitement, that's something i'm always looking for myself, and it's something i try to 'inject' into my art. that connection/path is the secret of making good comics.

jared - many thanx. am loving your style, too - BIGTIME!

this is such beautiful work shane, i am in awe!
who is publishing this, and where can i get a copy?

andy - much thanx for the words of praise, you're too kind, sir.

it's due out in the states early may from RENEGADE/BERSERKER.
DIAMOND are re-soliciting agen, so if your local comic store hasn't ordered, they should be able to. lots more info over the last few blog posts.

cool! my local shop has been getting some of renegades books. i'll make sure that they get this one!

beautiful work, man! love the shadows, shapes, and compositions. very rad! I have to hunt down a copy for myself!

Great article, Shane. It sounds like you really went through the wringer creatively..but look what's come out, once again, pages to be proud of. I'll certainly be tuning-in for this. I hope the reception will be great (did you see what I did there;)

Just to let you know that Diamond are putting out Channel Evil issue 1 in the UK in Mid May and in the states late June or early July.

I'm getting the first batch of copies at the Bristol Small PRess Expo this weekend and we'll be selling it there. I'll set up the Renegade website to sell copies directly next week too.

I can't wait to see the final comic, you have created some of the best artwork I've seen and the finished story is going to be awesome.